The “Hat Man” is an entity, possibly a shadow person, who people around the world report experiencing during episodes of sleep paralysis. He takes the shape of a man wearing a fedora or top hat who can fade away or walk through walls. Hat Man’s facial features and dress are generally not visible as he appears to be shadowy.

Here is a drawing one Redditor made of what the Hat Man looks like: 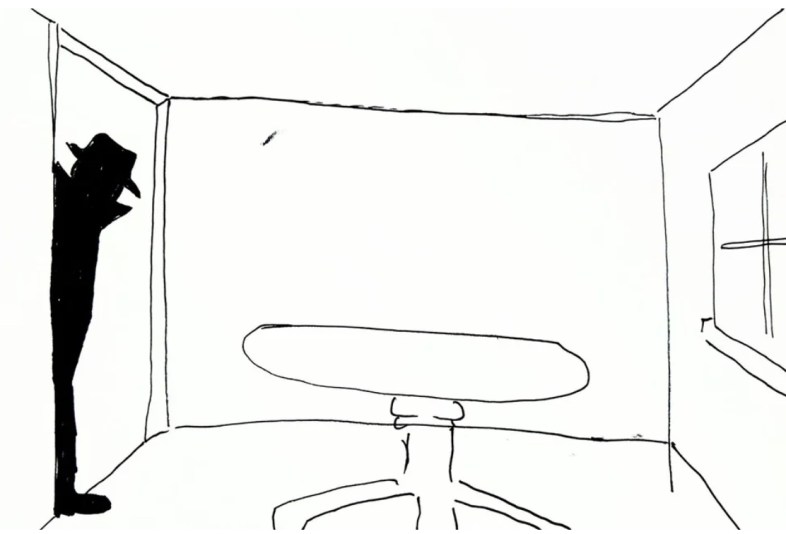 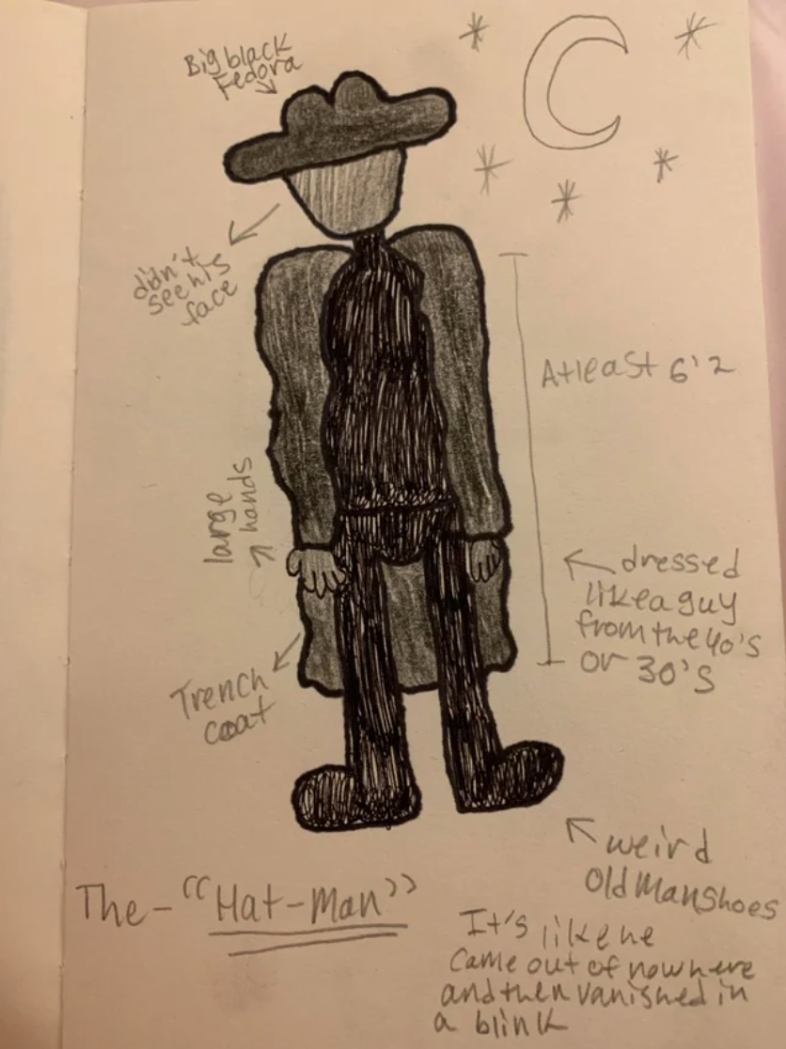 “In 2004, I was 19 years old in the military and living at my fathers house, Quebec Canada.

Suddently, I can hear the door to the backyard open. I can hear it but from my point of vision I cant see it. I think it is my dad coming back from the bar, 3h00 clock in the morning is the time bar close down in Qc so it makes sense in my head so I yell Daaaaaad?????

I can hear super fast pace coming directly to the entrance to my room, lts hard for me to describe the speed at which I heard it coming, I can say it was way faster than what human beings are capable of. And then right fucking there, a big shadow almost as high as the door frame, with a brimed hat and I could see an evil smile, I know most guys here didnt see the smile but I did.

I was paralyzed and petrified, I couldnt move at all, I felt like I was gonna die. It took only a fraction of a second from the door frame and HE JUMPED/LEAP ON ME! While he lept on me I closed my eyes, and while I felt his hands on my shoulder, I thought of repelling him with god or jesus christ I opened my eyes to fight back and he wasn’t there anymore and I could move.” — u/promixt

“When I was around 6 or 7 we lived in a small rural town that was a few miles away from a normal town. Anyways there was only like 30ish people here and we all knew each other. Well one day I was watching spongebob and I just had this weird butterfly feeling in my gut, so I decided to look to my right out of the bedroom to check on my dad. That’s when I saw him. A tall man with a big detective like that with glowing red eyes standing over my dad. I didn’t know what to do and freaked out. I kept yelling my dad’s name and he wouldn’t wake up. The creature didn’t even bother with me, but eventually my dad woke up and that’s when the thing looked at me and turned around fast. He walked toward the back of our house and I followed him. There was no door exit this way so it wasn’t like he was trying to escape. Well he was really fast and i barely saw his coat tail righr when he entered the bathroom. I ran in and he was gone. Nothing. No one was there. I looked everywhere. Even in the cabinet, under the sink, and in the water tank on the toilet. Before I left though I looked down and saw a dark liquidy looking pool underneath the water in the toilet bowl. I just flushed it and ran out.” — u/Xenostera

“I’ve dealt with the paranormal my entire life, but for the most part I can only hear and feel spirits. I recently met my dad after 34 years, and he lives in a very old, tiny town in Maryland. His house is 120 years old, and the first time I came to visit, I checked all the energy in all the rooms in the house and didn’t feel anything negative.

I came up 2 weeks ago to escape the hotbed for Covid that is Atlanta. The first night, there was a very tall, very distinct man who woke me up out of my sleep with a command. He had a 40’s style brimmed hat on, and was pitch black, which I could make out even though the room was pretty dark. He had a deep voice, and I can’t remember what he said, but I got up to walk to the door to do whatever he asked, before realizing he wasn’t human (or my dad). I turned towards him, then quickly laid down in bed and held my two year old daughter. I didn’t feel the crippling fear I used to feel as a child when spirits would come to my bedroom, but it was unsettling. I asked my dad about it the next day, and he said the only activity he has ever heard of is a man with a 40’s style brimmed hat standing at the end of the bed, staring at his ex-wife. She would tell him to leave and never had much issue with him.

My daughter has been saying “Go! HatMan!” When she stands at the top of the stairs, right outside of the room we’re sleeping in. I told him multiple times he had to leave, and since then I’ve only heard footsteps up the stairs once, but have not seen him. There is a very secure baby gate blocking the stairs. Yesterday, we both walked into our room for me to change. I heard my daughter yell “Go hatman!” and then the baby gate and my daughter tumbling down the stairs. I check the baby gate multiple times a day, and we don’t use those stairs (they’re not carpeted and extremely steep).” — u/Positiv4ghost4writer

Some people think he might be the Grim Reaper

“My first experience with the Hat Man started when I was ending 8th grade, about to enter high school. My normal routine was to shower at night, and again in the morning (one to clean, one to wake up my lazy , sleepy self) this particular morning I got up earlier than normal. What was usually 6:45am, turned into a 5:30am shower.

Just for reference, I grew up in a small home. 2 beds, one bath (across a small hallway from both rooms) and the living room /kitchen. Now my parents bedroom overlooks the hallway leading to the living room .my bedroom was right in front of the bathroom, a little more to the side of the house.

Anyway, I got up, showered, and began to walk to the living room to get my clothes that I had laid out for the following school day. As soon as I went to grab it, I froze. I saw a very TALL dark shadow. Now keep in mind I was on the younger side, and just thinking this is it. This is how I go. He was so tall he almost hit the blades of the ceiling fan. He had a hat, and a trench coat. He was a dark shadow, but for some reason, I still could see his features.

He didn’t wave, speak, smile. Just stood and stared. Almost as if just to let me know “I’m here now”. What finally snapped me out of it was something grabbing my ankle. I remember being HORRIFIED because I was still just wrapped in the towel. I screamed and my mom came running and asking if I was ok. I had a hand shaped bruise on my ankle, and she kept me home that day.(She always had a strong connection with the other side)

Over the next few years, leading to my Senior year in high school, my mom battled cancer. I would see him on and off, and she would see him in the hall way or in her bedroom, almost as if he was just watching, waiting .October 2015, my Mom finally lost her battle, 6 :35pm. My dad, sister, nieces, brother in law, and nephew were all in the living room until about 530am. We basically needed to process what had just happened. At that time, I got up to go use the restroom, and had realized the back door was still open from the mortician picking up my mom, so I went to go close it. I stopped halfway when I noticed a familiar figure. The hat man. He looked at me, and tipped his hat , almost as if he was letting me know he was leaving. I have no idea if he went because of all the negative energy from my mom being sick. Turns out the rest of my family had seen him too, different instances and times throughout those years revolving around my mom.” — u/JenArroyo02

One person even had an experience with multiple Hat Men

“In my experience, I have only witnessed the being(s) once. As surreal as this memory is I cant convince myself to believe I was conscious, or unconscious due to what the fuck I saw.

I was 5 or 6, It was around 8am on a weekend and I was getting up before all the family. I hopped out of my bed on the main floor and headed for the basement stairs, to get down there and play video games of course. I whipped the corner to the top of the stairs facing down and fuck me guys there was 4 or 5 solid black silhouettes, in trench coats , and top hats in a semicircle facing me just standing there at the bottom of the stairs. I remember them having no face no red eyes no canes and they said nothing. I froze and just stared for about 5 seconds and blacked out.

But it got fuckin worse, guys I literally woke up at the bottom of the stairs, ran back up into my bed and fell asleep. That Is the last memory of that experience.

This is what really fucks with my head and this is why I dont talk about it, and cant convince myself I was unconscious during that godamn experience.” — u/growmeplease

If he scares you, ask him to leave

“I used to sleepwalk and get night terrors and sleep paralysis as a child. And every night, without fail, this shadow man in a hat and long coat would stand in my doorway. He was darker than the darkest night. Even if I couldn’t see my hand in front of my face I could always see him. And on moonlit nights, no features were ever visible. He was just a clean silhouette made of pure darkness.

Around sunset, I would start feeling uneasy because I knew he’d be coming soon. He was never there when I went to bed but at a certain point in the night, I’d just know he’d arrived. I’d always roll over to look at him, and I was never afraid in those moments. I’d just stare at him and feel completely calm. It was more in the daytime that I felt uncomfortable about the fact that I had some shadow dude hanging out in my room.

I told my mum about it and she suggested that I just ask him to go away. Her reasoning was that if I wasn’t getting bad vibes off him, he’d probably leave if he knew I didn’t want him there. So when I was twelve, I asked him to leave and he did. Vanished without any fuss. And I haven’t seen him since.” — u/KLestrangeR

If you’ve had an experience with the Hat Man, please let us know so we can document it. We’re afterdark at thought catalog dot com. themes/thoughtcatalog-2014/images/tc_mark.gif" alt="TC mark" class=" tc-lazy-image" />